A massive, worldwide COVID testing campaign has launched, costing countries billions of dollars. But more and more experts are coming forward, claiming that the misuse of PCR (polymerase chain reaction) testing, the most common test for COVID, is resulting in a vast number of false positives. Many are denouncing the testing as illogical and fraudulent, stating that it shouldn’t be considered diagnostic. Yet these are the very tests that are used to report daily numbers around the country that then justify the policies to squander freedom and depress the economy.

We must demand transparency from state health departments and governors who are relying on these values and ask them to invalidate and retract numbers that lead to deception, given that fraudulent reporting during a state of emergency is a felony.

Equally important, the willing acceptance of these values comes at a great cost to society:

Shutdowns and restrictions on individuals and businesses must not be based on testing alone, especially PCR testing. Why?

How the PCR Test Works 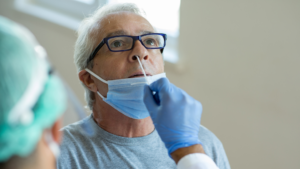 According to Our World in Data (ourworldindata.org), each day more than 1 million people in the United States are being tested for COVID-19. The most common test is the PCR test, which takes a sample swab of DNA and runs it through cycles of amplification. However, the tests are not a reliable means of detecting COVID-19 and are ultimately being used to justify lockdowns and other draconian public health policies.

PCR testing takes a swab sample of DNA and runs it through cycles of amplification. False positives are a result of the lab using a high number of amplification cycles, which is the number of times the RNA particles are magnified. A cycle threshold (or CT) of 34 cycles or more means the test is 100% useless as a measure of a true positive case. (Florida is the first state to require all labs to report the misleading CT.)

To guarantee that a positive is a positive, the PCR test must be run at 17 cycles; otherwise, accuracy becomes increasingly questionable as the cycles increase.

Accuracy is of upmost importance in a public crisis. The most valid way to test for infection is to look for a “live” virus using a viral culture. PCR tests cannot distinguish between live viruses and particles that cannot infect you and others, nor can they rule out other viruses or bacteria — you can get a positive result from the flu or other coronavirus fragments.

It follows that a positive PCR test does not indicate infectiousness. Thus the positive test result doesn’t represent a case, let alone an actual illness. As science writer and expert in molecular genetics, Pieter Borger, PhD, stated, “‘Confirmed cases’ is a nonsense number.”

So we must ask ourselves, what does a positive test even mean? What percentage of the “positive cases” used to keep society locked down and socially isolated is from those who are asymptomatic, based solely on a positive PCR test?

Other Issues with PCR Testing

Both the United States and the United Kingdom have reported large-scale testing kit contamination. http://bit.ly/2X32txs

Finally, the test can pick up on non-infectious virus fragments long after an active infection has resolved. http://bit.ly/385Zz1u

Transparency and accuracy are imperative during a public crisis. Call the labs that are processing PCR tests in your area and ask what cycle threshold they are using.

Making History with a “Test-Only Model”?

“Scientific knowledge is a body of statements of varying degrees of certainty — some most unsure, some nearly sure, none absolutely certain.” – Richard P Faynman, Nobel Prize-winning American physicist

Testing is designed to substantiate clinical observations. And this appears to be the first time in history that a pandemic has been measured and managed through testing alone, without clinical oversight to verify the tests or even justify the administration of a test. Without this clinical observation and oversight, it’s impossible to determine what percentage of positive tests will never be symptomatic or never be infectious. http://bit.ly/3b2Ep6n

Can we change course on this testing and reporting catastrophe? Can we hold health departments and other regulatory agencies and powers-that-be accountable for their acquiescence in this charade? Our human rights and freedoms, including our children’s future — hinge on our response to this unreliable testing model that’s defrauding the public. And it will undoubtedly be instructional for the next pandemic — how we respond today will set a precedent for tomorrow.

How Public Officials Can Help

If you truly care about tracking, tracing and accuracy of results, then you should care about this information.

We’re told we must comply without question if we care about others. Many are doing it willingly, but too many are being pressured into getting tested for COVID, sometimes repeatedly. However, genuinely caring for others doesn’t involve weaponizing fear or selling false solutions. It is truthful and transparent. And, in today’s fear- and anxiety-ridden climate, it’s more important than ever.