This is your warning

The Illinois government, long known for systemic corruption, has more recently become known for imposing on its residents and visitors some of the most draconian COVID-19 restrictions in the country. Even though most Americans think the COVID-19 pandemic is in the rearview mirror, Illinois’ corrupt government continues to advance a plan to dominate public health nationwide through an infectious disease testing and treatment surveillance regime. The plan involves taking control of your life and your children’s lives by coercing unwanted medical procedures and restricting activities using a compliance scheme called the “Do to Do” model. 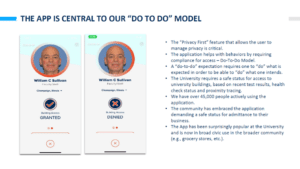 Pg. 14 of Power Point Presentation: SHIELD U.S. A COVID-19 testing system to get the U.S. back up and running more safely as we bridge to widespread vaccination. University of Illinois System (Dec. 14, 2020)

According to the plan uncovered as part of a Freedom of Information Act (FOIA) request, citizens are expected to “do” what is required, such as accept vaccination, to be able to “do” what they intend, such as go to a restaurant. The infrastructure necessary to support such a system for COVID and a whole host of diseases, is currently quietly being built out, with all expenses paid by taxpayers. In fact, during January and February of 2022, the City of Chicago implemented a “Do to Do” requirement. Citizens were required to show proof of vaccination or a negative COVID test to participate in a variety of indoor activities including going to the gym, attending a movie or show, or visiting a museum.

The plan coming out of Illinois is being deployed by a for-profit, university-related company called Shield T3, which is owned by the University of Illinois. And as of April 2022, Shield T3 had already incorporated in 20 states. So, if you haven’t heard of Shield T3 and you care about freedom and liberty, this is truly a must-read article.

Shield T3 – T3 standing for Target, Test, and Tell – has a suite of products including: a saliva-based test for COVID-19 called covidSHIELD, a proximity tracing app, a vaccine/health passport app, an agent-based modelling project, and a school-based program called Test to Stay. The SHIELD plan was first implemented at the University of Illinois, which for students felt much more like a prison than a university.

Pg. 20 of Power Point Presentation: SHIELD U.S. A COVID-19 testing system to get the U.S. back up and running more safely as we bridge to widespread vaccination. University of Illinois System (Dec. 14, 2020)

The SHIELD plan, originally code named “the Manhattan Project” by scientists at the university who were developing it, was presented to then-President-elect Joe Biden’s team in December 2020.  Invoking the World War II era code name for the project that led to the creation of the first atomic bombs is likely no accident. There’s a world war raging for control of human health, human freedom, and, likely, even humanity itself under the guise of protecting public health. The so-called “pandemic” caused by COVID-19 is clearly but the first battle. What’s happening right now is a deployment of the necessary infrastructure to support a private-public partnership for medical tyranny all across this country.

Premised on the notion of pandemic risk, since 2020, SHIELD has built out a massive COVID testing and surveillance infrastructure in Illinois funded almost entirely by federal pandemic relief dollars, which were earmarked for SHIELD’s exclusive use by Illinois’ billionaire democrat governor JB Pritzker, and taxpayer funds held by the University of Illinois. And while the perception of pandemic risk is now greatly diminished, a recent Shield T3 slide presentation stated that “Shield T3 is continuing to pursue opportunities to build a business for the long-term.” Shield T3’s plan is to increase its disease surveillance in at least three ways: (1) broadening its network of testing facilities; (2) increasing the number of diseases tested for by SHIELD tests; and, (3) performing more in-depth and detailed tests on people. 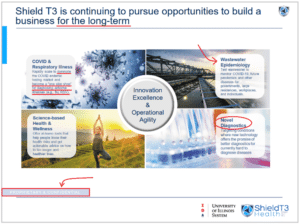 The SHIELD testing program currently centers around a saliva-based Polymerase Chain Reaction (PCR) test for COVID-19. As fear of COVID fades and vaccine failure becomes very widely recognized, however, COVID-19 is being seen as an endemic disease, and therefore, one of many background infectious diseases. So, Shield T3’s plan is to rapidly repurpose existing PCR equipment and infrastructure to test not only for COVID-19 but also for any number of other diseases including, most notably, influenza and RSV.

A recent job posting on LinkedIn gave a clear indication of where the company is headed: “Shield T3 Health is a mission-based molecular diagnostics company that provides high-quality, low-cost COVID19 diagnostics and molecular microbiology testing. We provide our clinical testing services through our CLIA-accredited laboratories that are currently located in Sunnyvale and Claremont in CA; Washington, DC; Georgetown, KY; Orono, ME; Chicago, IL; Dallas, TX; and Madison, WI.”

The Shield T3 job posting went on: “We are rapidly expanding into other areas of health care and clinical diagnostics testing. We are looking for a versatile molecular biology technologist to develop the technology necessary to develop state-of-the-art assays for microbiology, infectious diseases, genetics, genomics, and oncology with a special focus on PCR-based genotyping and next-generation sequencing-based laboratory-developed assays or IVD products.”

Shield T3’s expansion in terms of both geography and diversity of test offerings has followed the objectives outlined in several Rockefeller Foundation documents. And it should be noted that the Rockefeller Foundation provided grants and a strategic partnership to the University of Illinois to help SHIELD become established and expand. Of note is a March 2022 Rockefeller Foundation paper titled “Getting to and Sustaining the Next Normal — A Roadmap for Living with COVID” wherein a roadmap to the “next normal” is outlined. One of the most notable suggestions that “[t]he Administration should develop a national program for serological and, if possible, cellular immunology surveillance to complement viral surveillance programs… To enable this work, the federal government should establish an interoperable, electronic, national verification system to capture vaccination data, positive SARS-CoV-2 test data (including from high sensitivity and specificity rapid at-home tests with QR codes that can be uploaded), and serology information.” 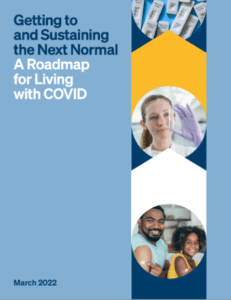 The excerpt above contains three incredibly noteworthy components: A “national program” for “immunology surveillance” using an “interoperable, electronic, national verification system.” Plans for each component are already being implemented, coincidently or not so coincidently, also under the term SHIELD. Like Shield T3, there is a little-known federal project which is also called SHIELD. For the federal data project, SHIELD is an acronym that stands for Systemic Harmonization and Interoperability of Electronic Laboratory Data. Are these two SHIELD programs related? Clearly, by subject matter, they are. And, the two SHIELD programs complement each other perfectly.

This national SHIELD program for immunology surveillance, using an interoperable, electronic, national verification system for what are apparently called “data users,” appears to be tied to every aspect of a “patient’s” life – from family to work to banking to medical care to the government. Shield T3 could very well be the data acquisition arm for the federal SHIELD surveillance and verification system.

On March 31, 2022, the Executive Director of the Health Department in Illinois’ second most populous county, Karen Ayala, testified before a committee of the U.S. House of Representatives requesting increased infrastructure funding to help overcome “data system and interoperability issues,” as she called them, to allow public health departments to know who is becoming infected and “opportunities for treatment” and “to intervene more effectively.” These and other tools requested during the hearing perfectly coincide with the suggestion outlined in the Rockefeller paper.

Regarding expanding testing to other diseases, Shield T3 and the Rockefeller Foundation were in near-perfect sync. However, the Rockefeller Foundation goes further by setting a goal that is unattainable without major restrictions and interventions by suggesting the government “[s]hift the focus from COVID to major respiratory viral illnesses like flu and RSV infection, with the interim goal of reducing annual deaths below the worst influenza season in the last decade.” One of the proposed interventions is to “[e]stablish a test-to-treat infrastructure that links all testing with high sensitivity and specificity to immediate medical consults and appropriate treatment, clinical trial enrollment, and public health guidance.” The results of all these tests “need to be systematically collected and directly linked to appropriate treatment, clinical trial enrollment, and isolation guidance.”

So, Shield T3 testing creates an open invitation and a direct path for doctors and public health officials to intervene with whatever is deemed appropriate treatment through this test-to-treat infrastructure. Clearly, the designation of appropriate treatment becomes very important. The Rockefeller paper claims “[e]ffective COVID therapy over the long term will most likely require a cocktail of two or three drugs.” This cocktail of drugs is already in development. And the paper suggests, “[t]he country needs a new Warp-Speed-like program with advanced purchase agreements and other financial and regulatory incentives to facilitate development and production of a multi-drug oral antiviral cocktail” and then reiterates that “[a]nother important element in therapeutics is to have a rapid test-to-treat pathway.” The paper’s conclusion is: “All Americans who have a positive PCR test should be contacted within a day and offered a treatment, enrollment in a clinical trial of a potential therapy, and advice on how to isolate and stay safe.” Shield T3’s flagship product is saliva PCR testing followed up with rapid contact and isolation. In fact, SHIELD’s plan states: “We need a SWAT team approach for hotspots.” At the University of Illinois, real-time data enabled the university to initiate what they called “SHIELD Team 30” to isolate students that test positive within 30 minutes. The Rockefeller paper also envisions teams “delivering public health interventions” to vulnerable populations, especially vaccines such as influenza and pneumococcal pneumonia vaccines.

The SHIELD plans are a dangerous gateway to unprecedented intrusions on individual rights and violations of fundamental freedoms and liberty. Shield T3 and the federal electronic verification system called SHIELD are vehicles for medical tyranny coming in the name of public health. Forcing medical procedures, whether vaccination or drug cocktails, through harsh tactics of coercion, discrimination, and isolation is only possible through a complex and highly detailed real-time electronic surveillance network.

N
Step One: The United States is in negotiations right now with other nations around the world to create a legally binding global pandemic treaty. We need to act now to prevent Americans’ health data from being linked to and exploited by global governance bodies. Sign SHF’s petition telling our lawmakers to say NO to a legally binding global pandemic treaty​.
Sign the Petition
N
​Step two: Share this information! There is, right now, an urgent need to raise public awareness of the SHIELD plans. A well-informed populace can raise our voices together to stop medical tyranny. Forward our email to your friends, or click the buttons on the left to share on social media!

(Dec. 14, 2020). SHIELD U.S. A COVID-19 testing system to get the U.S. back up and running more safely as we bridge to widespread vaccination. University of Illinois System. https://standforhealthfreedom.com/storage/2022/04/2020-12-14-Shield-Biden-Covid-Team-Review-vFinal-Implementation-plan-final.pdf

Rockefeller Foundation (Mar 2022). Getting to and Sustaining the Next Normal Roadmap for Living with Covid. https://www.rockefellerfoundation.org/wp-content/uploads/2022/03/Getting-to-and-Sustaining-the-Next-Normal-A-Roadmap-for-Living-with-Covid-Report-Final.pdf