Unsafe and ineffective COVID shots: The FDA has lost its way

The FDA has lost its way. Its mission is to protect Americans, not the pharmaceutical industry. A recent publication in the Federal Register announced an upcoming meeting to discuss the future of the COVID shots:

“On January 26, 2023, the committee will meet in open session to discuss the future vaccination regimens addressing COVID-19. This discussion will include consideration of the composition and schedule of the primary series and booster vaccinations.”[i]

At the end of January, the FDA advisory committee, the Vaccines and Related Biologic Products Advisory Committee (VRBPAC), will discuss COVID shot strain composition, timing, and how often new strains should be selected. Peter Marks, director of the FDA division in charge of vaccines and biologics, the Center for Biologics Evaluation and Research (CBER), has stated the FDA wants “normalcy” for the shots.[ii]

This is unacceptable. The FDA should be reviewing the safety and efficacy of the shots – and  considering pulling them from the market – rather than normalizing and increasing their use.

Most COVID shots are still under Emergency Use Authorization (EUA). Unprecedented numbers of safety complaints and adverse event reports have been filed. The shots do not prevent transmission of the COVID virus, and effectiveness is known to decrease rapidly or fail to protect against “breakthrough infections” (which would have been called “vaccine failure” before the COVID “new normal” newspeak).

Despite all of this, the FDA is not rushing to pull these shots from the market as they did with RotaShield, a rotavirus vaccine introduced in 1998. It took only 10 VAERS reports for the CDC to conclude, in its own words, “The temporal clustering after receipt of RRV-TV suggested a causal relationship,” and begin investigating.[iii] After an ongoing CDC investigation and 112 adverse event reports were made to VAERS, the manufacturer voluntarily recalled the vaccine.

Another vaccine rushed into arms of Americans, the H1N1 Swine Flu vaccine in 1976 was considered a disaster by public health experts around the world. It was called a “sorry debacle” and a “fiasco” by the New York Times. After a swine flu outbreak on a military base, the federal government rushed a vaccine to market for the public. The outbreak never spread across the country, but hundreds of Americans were injured by Guillain Barre Syndrome and 30 died as a result of the rushed vaccines.[iv] The 2009 H1N1 vaccine had a similar fate, flooding the VICP and the fledgling Countermeasures Injury Compensation Program (CICP) with a surge in claims.[v]

Claims for injury or death after COVID shots are astronomical; more than 7,500 claims have been filed in the Countermeasures Injury Compensation Program (CICP). Prior to the COVID shots, the CICP had “handled fewer than 500 cases in its entire history.”[vi] 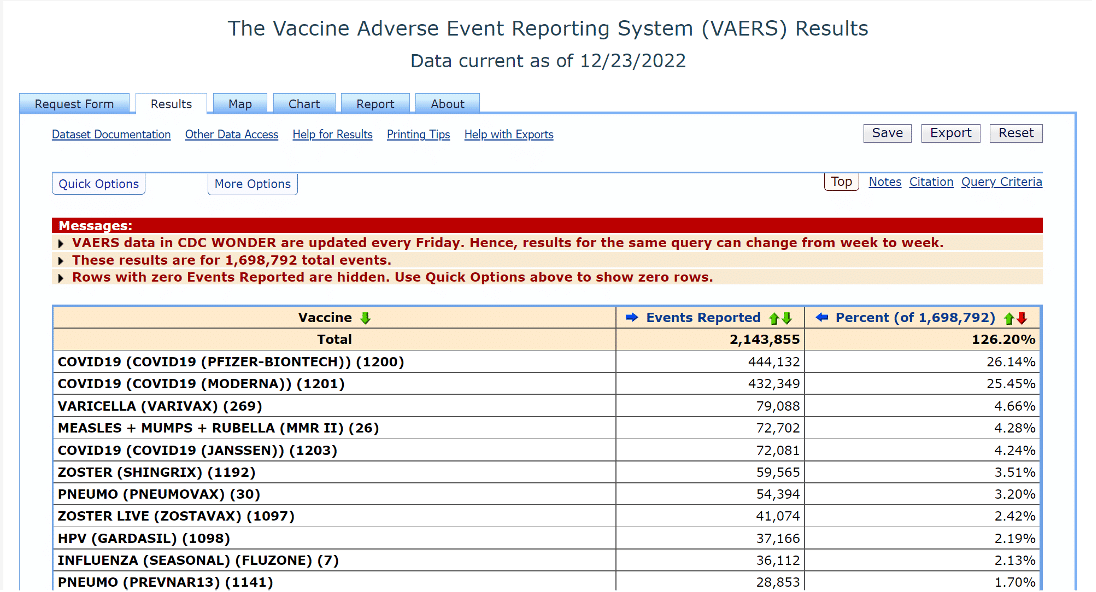 COVID shots from different manufacturers are three of the top five most reported vaccines. Adverse event reports from the COVID shots far eclipse the next most reported shots (chicken pox and the MMR), by more than five-and-a-half times each, or 11 times more when combined. And the COVID shots have only been approved for two years. Compare that to Varivax’s 27 years on the market after initial FDA approval,[i] and the MMR II’s 40 years of use.[ii] The safety signals are catastrophic and must be investigated. Instead, the FDA is adding gasoline to the fire by having a meeting to determine how best to get more of these dangerous shots into Americans from cradle to grave.

A closer detail from the same VAERS report, accessed January 3, 2023:

Two years after the first EUA, we are rapidly approaching 1 million claims of COVID vaccine injury or death in America, but our federal government is insisting the shots are safe.

Pfizer executive Janine Small told the European Parliament’s special COVID committee that Pfizer did not know whether the shot would prevent transmission before it entered the market.[i] Pfizer CEO Albert Bourla said the same in December 2020 as the first authorization was given by the FDA.[ii] So if Pfizer didn’t know, how could the FDA? But Americans were repeatedly told the shot was “safe and effective.” CDC Director Rochelle Walensky has also stated the shot cannot prevent transmission.[iii]

If stopping transmission of a virus is not a measure of efficacy, what is?

The terms “safe” and “effective” are loosely defined at best and there have been calls for the FDA to create workable definitions.[iv]

Where does the FDA’s mission of ensuring pharmaceuticals are “safe and effective” come from?

In the late 1930s, a cough syrup was put onto the market that killed over 100 children across America. At that time, companies had no legal requirement to test products in any way before they were sold.[v]

“[T]he way you tested drugs back in those days was essentially, the company would send its experimental compound to doctors across the country and say, you know, try this out in your patients — you know, and let us know how it works. And so they would sort of send the pills there, and the doctors would try it on their patients. There would be no controls. It wouldn’t — there wouldn’t be any sort of rigorous testing of it. The doctor would simply give it to their patients and then ask the patients to report back how they felt.”[vi]

In 1938, the Food, Drug and Cosmetic Act (FDCA) sought to remedy that. This law required the FDA to make sure drugs coming to market were safe. The FDCA gave the FDA power to require pre-market approval of the safety of drugs before they were sold to Americans. It was the first law that required manufacturers to safety test their products before putting them to market. The word “safe” was not defined and eventually was simply related to the health of man or animal.[vii]

The “effective” requirement was a Congressional response to the disaster of thalidomide. The government and the FDA were doing their jobs in this case. Thalidomide was prevented from gaining FDA approval after birth defects were seen across the globe from its use, and Congress acted as well to tighten up regulations in the United States. In 1962, Congress passed the Kefauver-Harris Drug Amendment, amending the FDCA to create a legal mandate that drugs must show effectiveness to obtain FDA approval.

All that is expected regarding efficacy is that “it could fairly and responsibly be concluded by such experts that the drug will have the effect it purports or is represented to have under the conditions of use prescribed, recommended, or suggested in the labeling, or proposed labeling, thereof.”[viii]

The COVID shots don’t even meet these meager standards for safety and efficacy.

We have recently learned through court documents and FOIAs that the federal government has been working with social media to censor the speech of Americans. Americans will not be silenced, especially when it comes to the health of our children and ourselves. The comments made in response to meetings are a public record of protest against the actions of an unaccountable and dysfunctional FDA and executive branch.

We know public outcry works to slow down the federal overreach and corruption. We also know it works to alert more Americans to what is happening. Last year the FDA postponed their vote on the COVID shots for kids after a huge public outcry on the lack of data. And even though the shots were ultimately authorized, our youngest children are the ones with the lowest compliance with the CDC recommendations for the shots: only 6.9% of babies under 5 have at least one shot as of October 2022.[ix] The questions and demands of health advocates for data and information about shots for babies changed the timeline for COVID shot approval and informed millions of parents who have chosen not to comply.

We must keep raising our voices, our concerns, and our questions about the COVID shots because the federal government is not doing its job.

The Vaccines and Related Biological Products Advisory Committee (VRBPAC) reviews safety and efficacy data for pharmaceutical products like vaccines that the FDA is considering for authorization or approval. The FDA does not have to call on its advisory committee, VRBPAC, before it decides on approvals, authorizations, or guidance. Some think having the advisory committee weigh in gives credibility to FDA recommendations and licensure because the panel claims to be independent from the government as well as industry. That viewpoint would only work when the FDA agrees with their recommendations. But historically, when it does convene the panel, the FDA has ignored its advice 22% of the time, according to a 2022 article in policy journal Health Affairs.[x] And the FDA seeks input from this independent panel less and less. “[T]he number of new approved drugs receiving advisory committee review decreased from 59% in 2011 to only 6% in 2021.”[xi]

When making decisions on COVID shots, the FDA acted without advice from VRBPAC twice — first when deciding on fourth boosters for Americans over 50, and then when deciding to extend the authorization for shots to children as young as 5. It’s widely believed some members of the panel would have voted against the expansions, which would have been bad public relations for the FDA.

The federal government was paying $19.50 per COVID shot under its initial contract with Pfizer, which was raised to $30. Pfizer reportedly plans to sell the shots to Americans directly for up to $130 starting in 2023.[xii] This would make it one of the most expensive shots recommended by the CDC, by dose, according to their 2023 price list,[xiii] and the costliest to the American people if (or when) the federal government recommends the shot annually.

Americans must stop paying in lives, livelihoods, and tax dollars for this dangerous and ineffective shot. Tell the FDA to do their job, making sure pharmaceuticals are truly safe and effective before allowing them to be sold to Americans.

Steps you can take

Step One: Tell the FDA they need to do their job right. Send a public comment to Regulations.gov here and use your voice.

Step Two: When Americans use their voices, it changes everything. This is why the White House worked with social media to silence dissent and questions about COVID policy and the shots. Let the new Congress know you support them in protecting our Constitution, especially free speech, by signing the SHF petition at the button below.

Take Action
N
Step Three: Get to know your U.S. Representative and Senator. Call their offices. Schedule a time to meet them. Listen to their town halls. Talk to the incoming U.S. Representatives about the World Health Organization and global health credentialing plans.
Find Your Legislator

[viii] To read more, and keep up to date on state laws, check out Ballotopedia.org for a great user-friendly list of proof-of-vaccination requirements throughout the 50 states, complete with interactive map and timelines. https://ballotpedia.org/State_government_policies_about_vaccine_requirements_(vaccine_passports)