When it comes to religion in the US, a huge and growing percentage of Americans don’t want anything to do with it. We are so turned off by the hypocrisy of our institutions — corporate, government, and religious — and especially of the things that have been done in the name of profits, public health, and God or gods, that ever larger numbers of us are running in the other direction. “Not religious” has become an American identity.

For a country whose very origins were forcefully secured and then proudly celebrated in the fierce exultation of religious freedom, this is a stunning turnaround. In both the Pledge of Allegiance and the full version of the national anthem, we have entrusted our nation to God and we have entrusted citizens to know best how to worship in a manner of our own choosing, without judgment or interference. How is it that so many of us are no longer religious? Are we becoming a nation of atheists?

As with most things, the truth is a bit more nuanced. It’s not that we don’t believe in anything. Far from it. Americans have deeply held beliefs about existential and metaphysical truths that government or science can’t — and shouldn’t try to — explain or prove. We just struggle with the language around it. The words spiritual or conscientious beliefs don’t quite capture it.

What we do know, however, is that we sure don’t want the religious affiliation. Religion has become a fraught word. In 1972, 5% of the population was religiously unaffiliated. Today, it’s 23% and climbing. Our religious institutions have struggled mightily under the weight of their gospels, the all-too human qualities of their leaders, and their shocking and self-serving attempts to hide their behavior. We don’t trust them. They’ve lost their moral authority.

Here’s the problem with our apathy: There are no qualified candidates to fill the void that our religious institutions have abdicated. As we have distanced ourselves from religion, is it a coincidence that we have also been losing our moral grounding? Who are we? What do we worship? Do we believe in America anymore? We’re standing by helplessly as our government and corporations destroy our health and our environment, devalue the importance of the family, undermine parents, weaken the doctor-patient relationship, and enrich ever smaller numbers of the obscenely rich at the expense of a vanishing middle class. More than ever, Americans don’t read or watch the news. We struggle to talk about the things that matter in our communities. In any given election, as many as half of us don’t even vote.

How’s this working out for us? Not so well.

Religious freedom is the right of Americans to decide who is our — choose the word you prefer: moral, ethical, higher — authority. Freedom of religion is nothing short of a desperately needed counterbalance to the overreaching and increasingly egregious exercise of government and corporate power. The US Constitution affirms our essential sovereignty — We the People delegated enumerated powers. Government serves and represents us, not the other way around. If we don’t assert our right to choose our higher authority, our most powerful institutions will continue to insert themselves where they do not belong. They will invalidate our doctors. They will tell us what to believe. And if we don’t agree, they will do an end run around us and tell our children.

This is not hypothetical. It’s happening right now.

Legislators in five states (two this year) have removed religious exemptions to mandatory vaccinations. Many more states are attempting to do the same. Do these lawmakers represent you? Sign the petition to affirm your right to act according to the dictates of your own moral authority. Medicine must be a voluntary, “opt in” undertaking — that is, we must be free to choose our doctors and our treatments without interference. Mandatory medicine is an oxymoron. Without health freedom, we are not free.

The question, “What is your present religion?” is not the same as, “Do you have religious beliefs?” The state seems to only care about formal religions, which have marble buildings and a big book. That is a grave misunderstanding of our constitutional freedom of religion. There are only two requirements for a religious belief to be protected by law: the belief is religious in nature and sincerely held.  Religious freedom does not derive its legitimacy from the identification with any organized religion. Religious freedom is the constitutionally-protected right of Americans to choose to worship our higher authority (i.e., act in accordance with convictions). It’s your personal religious beliefs, not “the church’s” (or mosque’s or temple’s) beliefs that are worthy of protection.

Religious in nature means it is a matter in question that can’t be answered exclusively with the intellect or in a textbook. It’s bigger than that and requires inspiration from a higher power.  Being vegan because you think it is healthy is not a religious belief.  Being vegan because it violates a deeply held belief that we should not prematurely kill animals for our consumption or pleasure is “religious in nature” and this belief can be protected whether you hold a religious affiliation or view yourself as religious or you belong to an organized religion that does not share this belief.

An individual’s religious beliefs do not require approval from an organized religion.  It is a serious mischaracterization of our freedoms and misleading to the public when the press interviews religious leaders to speak on behalf of the validity of the exercise of religious freedom. It is likewise a disservice to its congregation when religious leaders make public statements claiming to speak in their official capacity on behalf of the legitimacy of the beliefs of their adherents.

The first of all amendments to the Constitution could not be more clear in its intent and importance: a law to protect the legitimacy and integrity of all citizens to worship in a manner agreeable to the dictates of his own conscience, without interference or scrutiny. As government erodes religious freedom, government increasingly becomes our higher authority, dictating our most personal and private behavior. Mandatory medicine is part of this trend. 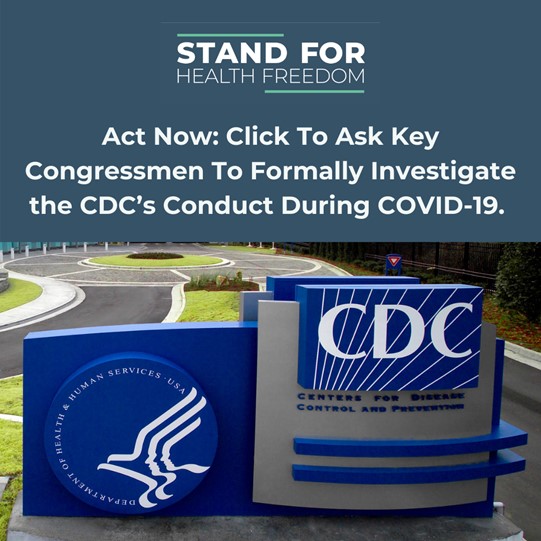