“Finally, Biden’s unlawful mask mandate has been halted by a Florida judge,” Georgia Attorney General Chris Carr said in April. “Our office has challenged this purely political charade every step of the way. I will always fight back when Biden’s policies go too far and infringe on Georgians’ liberties.”

And when employers were forced to impose vaccine mandates last September, Carr said, “We will not let the Biden administration bankrupt businesses and kill jobs with unconstitutional mandates! As attorney general, I promise you Georgia will lead the fight to stop this dangerous overreach.”

While personally pro-vaccine, Carr knew it was unconstitutional for the president to force private companies to become the health police, imposing mandates on their employees. The U.S. Supreme Court agreed with Carr, blocking the mandate. Carr is also fighting Biden’s vaccine mandate on federal contractors as well as vaccine and mask mandates on teachers and toddlers in the Head Start program. Federal courts have temporarily blocked both of those mandates.

While in office, Carr has filed five separate lawsuits in response to the vaccine and mask mandates imposed by the Biden administration.

“As Georgia’s Attorney General, I stood up to the left with Governor Kemp and kept our state running during the pandemic,” said Carr. “I fought to reopen Georgia and keep our children in the classroom. That’s my job: I’ll always fight to defend Georgians like you!”

Stand for Health Freedom supports candidates who make and protect policy to support individual and family choice in matters of health and bodily autonomy. We believe Chris Carr will defend and expand these rights for Georgia residents. 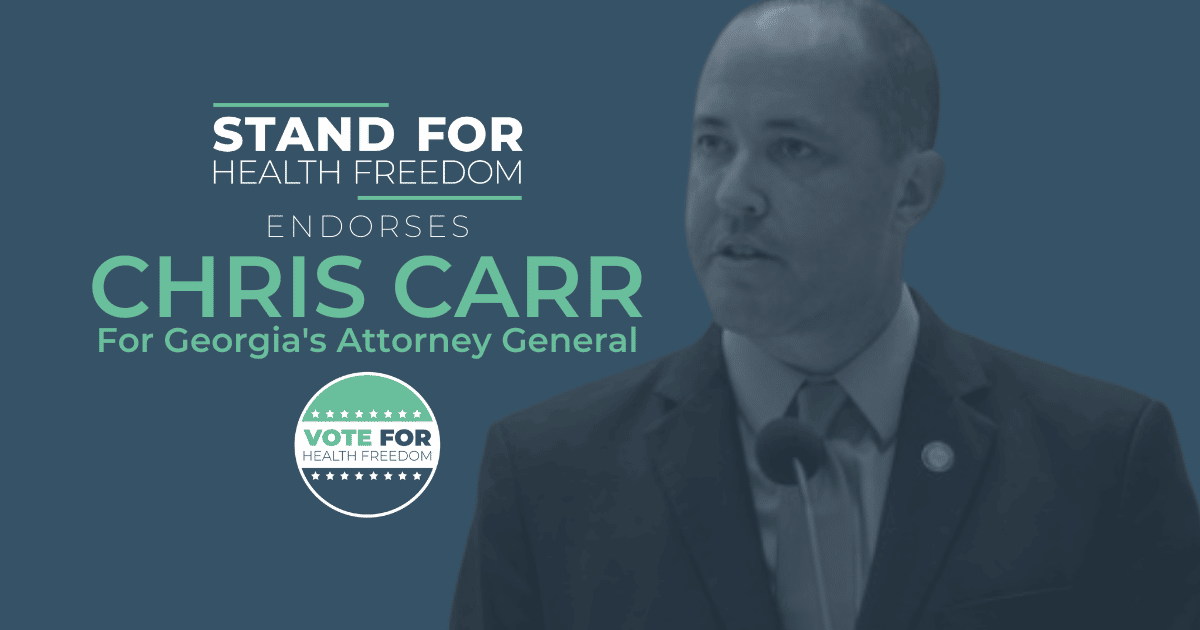 Steps you can take

Step One: Support Chris Carr for Georgia’s Attorney General by joining him on his website page here.

Step Two: Use your voice to tell your governor and local legislators that COVID-19 vaccines must be voluntary! Personal choice, not public pressure or coercion, must be the only factor in getting a vaccine.

Step Three: If you appreciate the work we are doing here, please support us. We are 100% donor-funded by health freedom loving advocates like you.

Donate Here
N
Step Four: Stand for Health Freedom is now vetting and supporting other health freedom loving political candidates. Please reach out to your favorite candidates and ask them to fill out our survey in the button below.
Candidate survey
Share This