The War Against Vaccine Safety 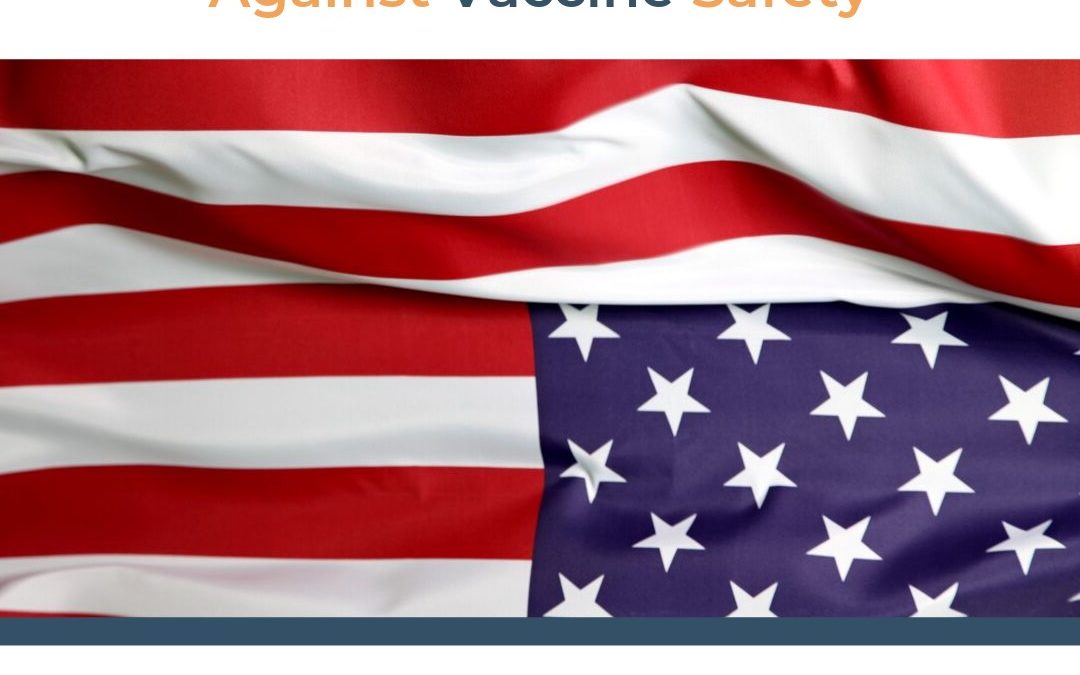 The War Against Vaccine Safety

Legislators, public health officials, professional physician associations, and pharmaceutical vaccine corporations are aligned and on a mission to abolish the right to decline mandatory vaccines. Why are they being met with fierce resistance? Unlike with any other pharmaceutical product, the industry and physicians have no liability for any injury or death resulting from vaccines. Parents, who are the sole stakeholders with full responsibility for adverse outcomes, are demanding reassurances regarding vaccine safety. They also want their Constitutionally protected rights and responsibilities as parents for informed consent in medical decisions to be honored.

Lawmakers respond to the increasing volume of questions of safety with calls for stricter mandates and calls for full compliance with the ever-expanding vaccine schedule. Parents don’t feel heard even though an unprecedented number are contacting their legislators across the country, writing letters, making phone calls, and requesting meetings. Some are willing to  be arrested,[1] lose relationships, sacrifice community, leave schools, lose credentials, and jeopardize livelihoods. If the science is settled, if vaccines are universally safe and effective, why are so many willing to risk so much?  Why do legislators risk voter disgust and resort to coercive laws for a medical product that enriches the very unpopular pharmaceutical industry?[2] Above all else, the vaccine program relies on trust and confidence to work as designed.[3] So why is discussion on this issue so taboo?

When something doesn’t make sense, it’s time to take a closer look.

What is the appropriate role of government in our lives?

Forced compliance with the vaccine program is showing up in the form of stricter legislation all across the country. This is a big deal. We are losing our rights. The state is eliminating exemptions. It is inserting itself between doctors and patients. It is lowering the age of consent to 12 years (sixth grade). It is banning discussions about vaccine safety on social and mainstream media. It is mobilizing powerful institutional and high profile players, including schools, hospitals, pharmacies, research centers, celebrities, and more.

It’s time to organize in new ways. Stand for Health Freedom was created to empower the people with digitally scalable, grassroots health activism, making it possible to educate and impact their lawmakers from home with only a few clicks.

What is the significance of California’s new law, SB276?

In an unprecedented and historic move, and in flagrant disregard of the pleas of huge numbers of distraught voters, lawmakers moved decisively to insert the state of California between doctors and their patients,[9] aggressively seizing the right for state-appointed officials to access and override private medical advice when it counsels against vaccination due to individual risk (or an already established medical history) of catastrophic injury and death. All Democrats voted for it. When confronted with this unprecedented and overreaching special interest bill, the party that used to stand for the rights of women, for the marginalized, disenfranchised, vulnerable, and bullied, and for freedom of choice, did not stand for the rights of  children and the parents who protect them.

This law drives a wedge between physicians and patients. Who will offer medical care for these children who cannot be vaccinated based on adverse reactions to earlier vaccines? Even prior to the passage of SB 276 and SB 714, doctors have been moving to safeguard their livelihoods and reputations. There were already around 800 California doctor offices on record refusing care to even partly unvaccinated children who sustained anaphylaxis following vaccination.[10] Doctors are taking action to avoid scrutiny and ensure they are not perceived as anti-vaccine. It is not safe to express legitimate concerns about a pharmaceutical product that is understood to be so dangerous that all professionals who administer vaccines and the entire vaccine industry sought (and obtained) liability protection. Immunity for industry and doctors. Mandates or no schools for families.

Access to medical care will only get worse for California children with these new laws promoting the practice of government-legislated, one-size-fits-all medicine. The new law allows medical exemptions to be temporarily grandfathered in, however, periodic reapproval of exemptions based upon CDC/ACIP/AAP list of contraindications is required. The list is so restrictive that 99% of all children with existing exemptions will not qualify and will therefore be ineligible for public school when the new criteria are enacted.

The real crisis is one of chronically ill and neurologically damaged children, which lawmakers are not moving to address. None of the representatives who voted yes to California’s shocking new laws can answer the question, “Where are the autoimmune diseases and developmental disorders in our children coming from?” The rates of sick American children have been skyrocketing, from 12.8% for those born in the 1980’s to 54% today[11] — the same disorders listed in the vaccine package inserts — in lockstep with a three-fold increase in the pediatric vaccine schedule during the same timeframe.

This California law marks a watershed moment in US history as it relates to bioethics and human rights. Will we become a country that allows big industry and governments the right to forcibly or coercively inject citizens with known unsafe, liability-free products in contravention of international human rights standards around the world? For decades since World War II, when free people across the globe said “never again,” the field of bioethics has grown dramatically. International norms have upheld the rights of citizens in free nations to prior, free, and informed consent. This was affirmed most recently in the Universal Declaration of Bioethics and Human Rights in 2005.[12] Are we ready to backtrack so easily and for what? What are governments not telling us?

What is the appropriate role of corporate power in making the laws that impact our lives?

There is undue influence, driven by a government-industry revolving door[13] and relentless pursuit of profits.  Ignoring causes, Drug companies are peddling inauthentic solutions. Our children are medicalized, their diagnoses are commoditized, and pharmaceutical solutions are institutionalized into the fabric of our lives. Mandatory vaccines are required to go to school. ADHD meds are required to stay in school. Epi-pens and inhalers and anti-inflammatory drugs are logged with school nurses across the country.

Where are our children in this equation? There’s a bullseye on their backs.  The pediatric drug market, the multinational, multi-billion-dollar pharmaceutical corporations — the most hated industry in America[14] — see dollar signs behind their products used to treat children for asthma, allergies, seizures, tics, rheumatoid arthritis, diabetes, anaphylaxis, ADHD, anxiety, depression and more.[15]  Counting on a free press to keep them in line? Don’t, they’re also bought. The US now ranks a shocking 48th in press freedom[16] and, for the first time since the index was started in 2002, was most recently included with countries described as “problematic” for its treatment of journalists.[17]

Voice your concern to your local lawmakers and STAND for health freedom with just one click.

Are you breathing a sigh of relief that you don’t live in California? New Yorkers and Mainers aren’t. Both states recently lost the religious exemption and they know what’s coming next. Do you? Think it’s an accident that California is in Pharma’s crosshairs? California is the world’s sixth largest economy and the beating heart of our popular and celebrity culture. If the progressive, Wild West can be tamed, it  establishes a legislative and cultural precedent — expect to see other state dominoes falling soon. There are bills moving in over a dozen states — maybe in yours? And we’re not just talking about daycare and secondary school.  Institutions that are not required to follow state vaccine law are doing so just the same. Expect to see  colleges, summer camps, and private athletic and academic programs follow suit. Unwilling to assume the professional, reputational, and insurance risk, many hundreds of doctors across the country are quietly terminating vaccine-hesitant families, a trend that the AAP endorsed over ten years ago[18]. Many ignored it then. Will you take a stand now?

In this environment, vaccine targets wait for no one. The call for mandatory vaccination succeeds because — in the appeal for public health and in your mind’s eye — vaccines are always for someone else and vaccine injuries always happen to someone else. Until they come home to you. First, we start with the children who are vectors of disease. Then the pregnant and elderly and health-compromised, who are more vulnerable, plus the health care professionals and first responders who serve them. Look for an appeal to police, firefighters, teachers, and clergy. It will soon be followed by people who work in corporate campuses, shopping malls, airports, sports stadia, churches, and other densely populated areas. Homeschoolers have already been targeted in the media as illegitimate loopholes of the vaccine hesitant to legislated against next. Before too long, it will be you. Regardless of your philosophy, religion, or current health status, you will be affected by this issue.

Stand for the health of our children and say no to the systematic dismantling of our rights. Stand for Health Freedom expands grassroots advocacy to the digital world and your backyard. We make it easy for concerned citizens to connect with lawmakers, media outlets, and others in positions of influence. Join Stand for Health Freedom today! Start here. Sign this key petition to demand that lawmakers and vaccine makers prioritize safety in America’s childhood vaccine program.

*When you join Stand for Health Freedom, you will be asked for your address, email, and phone number.  Your address helps verify constituency and makes communication from you to your elected officials meaningful on the advocacy portal.  Your email and phone number are needed to establish connection with your elected officials when campaigns pertain to your state or the U.S.  We are committed to not sharing your private information short of a court subpoena.

[2] Gallup, “Business and Industry Sector Ratings” 2019 (pharmaceutical industry rated last with a score of -31, below the federal government) https://news.gallup.com/poll/12748/business-industry-sector-ratings.aspx.