ACT NOW INDIANA: Click to support a resolution ending the state of emergency in Indiana!

The reasons to lift restrictions on individuals and business are numerous and well documented.


Have a question or need help? 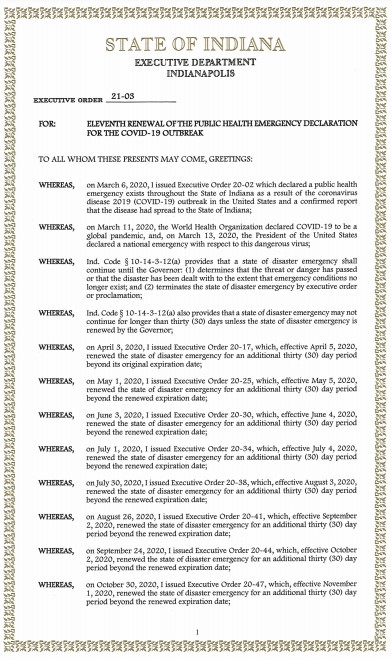 The governor’s declaration of emergency — followed by numerous orders closing non-essential businesses, limiting the capacity of businesses, closing and restricting schools and public functions — have created immeasurable economic, psychological and physical damage to Indiana families. Most of these families were also deprived of due process in the course of the unending emergency declaration. Poverty, mental health problems, substance abuse, child abuse and domestic violence have sharply increased as a direct result of the governor’s overreaching orders. The governor’s response to the virus has been far more detrimental to Hoosiers than the virus itself.

It’s time for Hoosiers to stand up for their constitutional rights! Simply click below to send a pre-drafted, customizable email to the speaker of the house urging him to take up the resolution and to vote YES! The email will also go to your local Indiana legislators so they can ask to be added as an author on the resolution and named as a resolution sponsor after it passes the House.